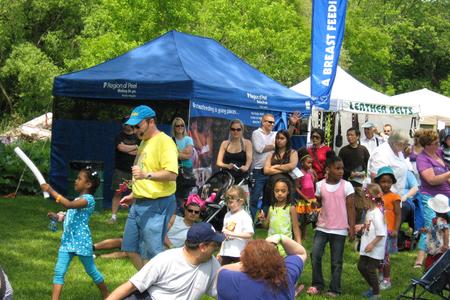 ​About The Robert Davis Kid's Show:

The first question I usually get from interested programmers is "What is your show about?" Scratch that, it's usually "How much do you charge?" but I digress. So to help you in your programming decision making I'll answer the first question first (then answer the second one!)

- It's primarily a family music show with original and cover kid's tunes plus I make use of the popular pop dance tunes of the day. Hey, that's what many younger kids are listening to today, especially on YouTube. My audience's age range is 1-7 years.

- I like to involve EVERY child in the show with interactive dancing and participation. I often bring kids on stage to help out with a song or routine but like to have the whole audience get involved.

- As a big fan of "prop comics" like Carrot Top, Rip Taylor and even Steve Martin (who I saw performing in a small club in Toronto during his stand up days) I like to use relevant yet funny props and one liners to keep the show moving and even a little bizarre. There's not a boring moment in my show. Often props support the songs.

-  Many of my songs are educational, story telling and support themes like the environment and animals but the entire show isn't about one theme. Yes, children will learn the names of the Five Great Lakes and how not to litter but it's via entertainment.

- Magic. I have created original "magical surprises" to provide the added value of magic and surprise to my show.

- Fun. If life isn't about having fun, especially as a child, then something's wrong. Children's entertainment is not about selling CDs anymore, it's about creating community and the mutual enjoyment of artistic & musical expression, dance, fun & laughter.

Now, about that fee, you will find mine to be reasonable yet I have to take into consideration driving distance, accommodation and number of shows. I'm a solo performer & wear all of the business hats so don't be shy to ask for a better price. I'm known for my hats!​